Does My Homeowners Insurance Cover Slip and Fall Accidents On My Property?

This potential coverage is good news for both homeowners and victims. The medical bills alone from fall-related injuries total some $70 billion per year. However, as anyone who has ever filed a homeowners or other insurance claim can attest, insurance companies look for any excuse possible to deny these claims.

Insurance company lawyers often look to the applicable law or the facts of the case when they try to reduce or deny compensation. Both these areas are quite complex in Milwaukee.

The bottom line is that a victim cannot assume the insurance company will roll over and pay a fall or other premises liability claim. In fact, insurance companies often only pair fair compensation if a slip and fall accident lawyer in Milwaukee is in the picture. Fair compensation usually includes money for economic losses, such as medical bills, and noneconomic losses, such as pain and suffering.

Falls are by far the most common, and most expensive, kind of premises liability claim. They’re also one of the many claims that these policies could pay. Generally, homeowners insurance policy limits are much higher than auto insurance limits. Once again, that’s good news for homeowners, who don’t want to be financially responsible for these claims, and for victims, who deserve fair compensation.

Older people face a much higher fall risk than younger people. Age-related Macular Degeneration is one reason why. AMD gradually and almost imperceptibly blurs the straight-ahead vision people need to maintain balance and watch for hazards. Because the symptoms come on so gradually, many people do not know there is a problem until it is too late.

Older people are also at risk for more serious injury. Roughly half of fall victims over 65 cannot live independently after a fall. That’s usually because falls cause both physical and emotional injuries. Physical injuries, like broken bones, often never fully heal. Neither do the emotional wounds. In fact, some of these victims are so afraid of a repeat fall that they basically become prisoners in their own homes.

The exact location of the fall usually matters. Depending on the facts, a sidewalk could be a common area which a homeowners insurance policy does not cover. The same thing could apply to a greenbelt and other outside areas.

Generally, homeowners have a duty to keep people safe and secure. Negligent security claims usually occur on commercial property, but they could occur at a private residence as well.

Assume Bill is hosting a party. Hank and Dale get into an argument. Bill does nothing to break up the altercation. The situation escalates and Dale shoots Hank. Since Hank and Dale were invitees, as outlined below, Bill probably had a legal duty to break up the fight before it turned violent. As a result, Hank could have a claim against Bill. His homeowner’s insurance company would be obliged to defend him in court and pay damages.

In addition to inadequate live security, other lack of security issues include malfunctioning or missing cameras and burned-out or missing security lights.

We usually get about two weeks of summer in Milwaukee. Therefore, most swimming pool injuries in Wisconsin are indoor pool injuries.

Many child drownings happen at crowded pools. Everyone assumes someone else is watching a child.

Other injuries are drain or pump-related. If the drain is too strong, the resulting riptide could pull swimmers under the waves. If the pump isn’t working properly, a chlorine gas cloud could form. Like bacteria, these clouds are especially dangerous for people with certain pre-existing conditions.

Roughly a third of homeowners insurance claims in Wisconsin are animal attack claims. So, if you have a large dog in your household, expect to pay higher insurance premiums. Much like falls, dog bites often cause severe physical and psychological injuries.

Wisconsin courts also recognize the so-called one-bite rule. If the owner knew the dog was dangerous, liability could attach. Evidence of knowledge includes items like:

Both the scienter (knowledge) rule and the strict liability law have some pros and cons which a slip and fall accident lawyer in Milwaukee must take into account.

Issues in a Slip and Fall Claim

As mentioned, Wisconsin premises liability law is rather complex. So, most victims must go through a two-step process to obtain maximum compensation for their serious injuries. If homeowners insurance company lawyers prevail in any one area, the victim/plaintiff’s case usually collapses.

Most injury claims begin with a legal duty. To determine the applicable duty in a slip and fall claim, Wisconsin and most other states divide victims into categories, as follows:

Most fall victims are invitees. If the owner invites someone into the home, that victim is probably an invitee. The aforementioned benefit could be the social benefit of having someone over to the house.

Owners have a duty of reasonable care in this area. This duty includes a responsibility to make the premises safe and conduct frequent safety inspections.

Passers-by, such as joggers, are usually licensees. Owners must only warn these people about latent (hidden) defects, such as a covered sinkhole. Party crashers could be trespassers, although they might not meet the “no benefit” requirement. Usually, owners have no duty regarding trespassers.

Victims must usually prove knowledge of the fall hazard by a preponderance of the evidence, a legal term which means “more likely than not.” Both direct and circumstantial evidence is admissible.

Direct evidence of actual knowledge could be an open repair invoice or a previous fall at that location due to that hazard.

Reach Out to a Dedicated Milwaukee County Attorney

Homeowners insurance companies are normally responsible for fall injury damages. For a free consultation with an experienced slip and fall accident lawyer in Milwaukee, contact the Martin Law Office, S.C. We do not charge upfront legal fees in these matters. 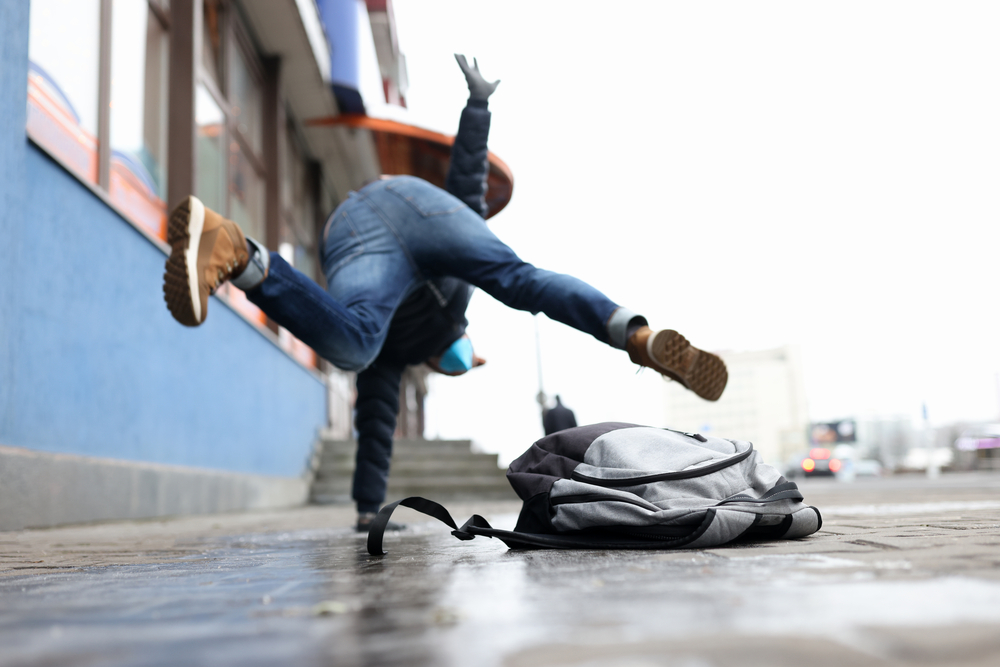