Why Other Drivers Are Found At Fault In Motorcycle Accidents

There are approximately 2,100 motorcycle accidents reported in Wisconsin each year, according to official statistics from the state Department of Motor Vehicles. For 2019, the last year with complete figures available, motorcycle accidents claimed the lives of 82 motorcyclists, with another 1,888 sustaining serious injuries.

Motorcycle accidents occur for a number of reasons. Some accidents are single-vehicle affairs involving operator error. Sometimes the problem is a defect in the motorcycle itself or poor road conditions. But the most frequent cause of serious and fatal motorcycle accidents is the negligence of another driver on the road, usually someone in a car or truck. Here are just a few of the more common motorcycle accident scenarios we see in Wisconsin:

If you are a motorcyclist who has been seriously injured in an accident with another driver, you may have a claim for monetary damages. Similarly, if you have a family member who has been killed in a motorcycle accident, you may have a wrongful death claim against the responsible parties. In either case, the ability to recover damages depends on presenting evidence of the other driver’s negligence under Wisconsin law.

Negligence requires proof of all of the following elements:

Comparative negligence is not necessarily an all-or-nothing defense. The other driver may even admit they were negligent. But they can still argue that the motorcyclist also did something wrong and that they should therefore share some of the legal responsibility for their own injuries. In Wisconsin, the rule is that a plaintiff in a personal injury case may still recover some damages, provided their negligence is not greater than the combined fault of the other parties involved.

So how does this work in practice? Basically, when a personal injury case goes to trial, the jury will consider all of the evidence and rate each participant’s fault as a percentage. Let’s say the plaintiff was riding their motorcycle and got hit by the defendant. The jury could decide the other driver was mostly to blame for the accident and rates their fault at 80 percent. But the jury also concluded the motorcyclist did a couple of things wrong, so it rated their fault at 20 percent.

The jury then calculates the total amount of monetary losses–damages–sustained by the defendant. To keep things simple, our hypothetical jury decided the motorcyclist suffered $100,000 in damages. The judge would then order the other driver to pay 80 percent of that amount, or $80,000, to reflect the motorcyclist’s comparative fault.

One more thing to note about comparative fault: Wisconsin law states a plaintiff can only recover damages when their fault is not greater than that of the defendants. In terms of numbers, this means that if the jury decides the motorcyclist was 51 percent or more at fault for their accident, then the other driver does not have to pay for any damages.

If you are involved in a motorcycle accident, it is important to remain calm and not take any action that might make your situation worse. You should never get into an argument with the other driver. Instead, simply take down their insurance and contact information. You should also call 911 even if you are not injured, as the police can still come to the scene and prepare an official accident report.

It is also a good idea to seek medical attention, even just to confirm you were not seriously injured, and notify your insurance company as soon as possible. And if you have sustained damages and need legal advice on what steps to take next, you should contact a qualified Oak Creek, Wisconsin, motorcycle accident lawyer who can advise you further.

Call the Martin Law Office, S.C., today to schedule a free case consultation with a member of our Wisconsin personal injury team. 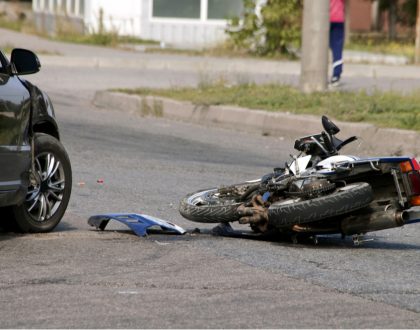